Is it me or did the big chonker soul repeat twice? Guessing that's meant to happen?? I'm playing the HalloJam version as the Itch launcher only seems to allow the download of the old file; so that might be the issue. It would be nice to play the new version, but I'll just check in at a later date so see if it's working.

Loved the short little game! The doggo is precious, the amount of dialogue is super fun and now I wish I had even more of this duo! Cuteness overload, can't get enough.

Heads up for other players, make sure you guys download RPGAce if you're unable to play it. It'll be handy to have for other games you might play in the future aswell. Chris' Tutorials has a quick Youtube video if you're having issues installing. Plus don't worry if the controls are different than what the title screen says, I played with the arrow keys, r-shift & spacebar/enter just fine.

Here's a participant's badge for the jam! 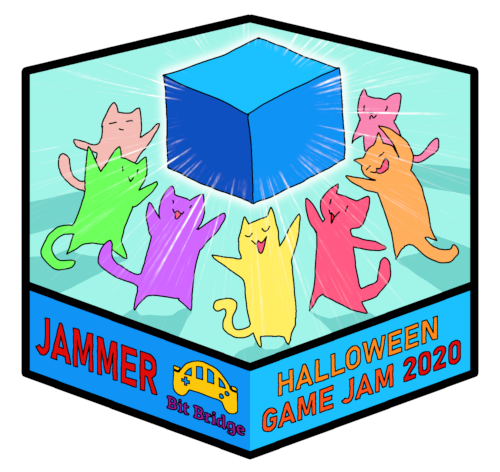 The dog is so cute! Really like the expressions for of Gwim and Saja. The soul designs are interesting too. I really wanted to see what was in the area I get turned back from, haha. I also kind of wanted to explore the map that didn't have any clear borders, though getting to next areas seemed to be more specific tiles that were on the path. Anyway nice job!

the game is so cute! I haven't finished it yet because I still have to find soul no.7.

Thank you so much, but I hope the last soul doesn't give you trouble! Please let me know if it proves too finicky to track down, as there's a chance I might have drowned out the signal sparkles too much, so I can look into making adjustments!

l live both the art style and the story!great game keep it up!

Thank you so much for the kind comment, I'm very glad you enjoyed it!